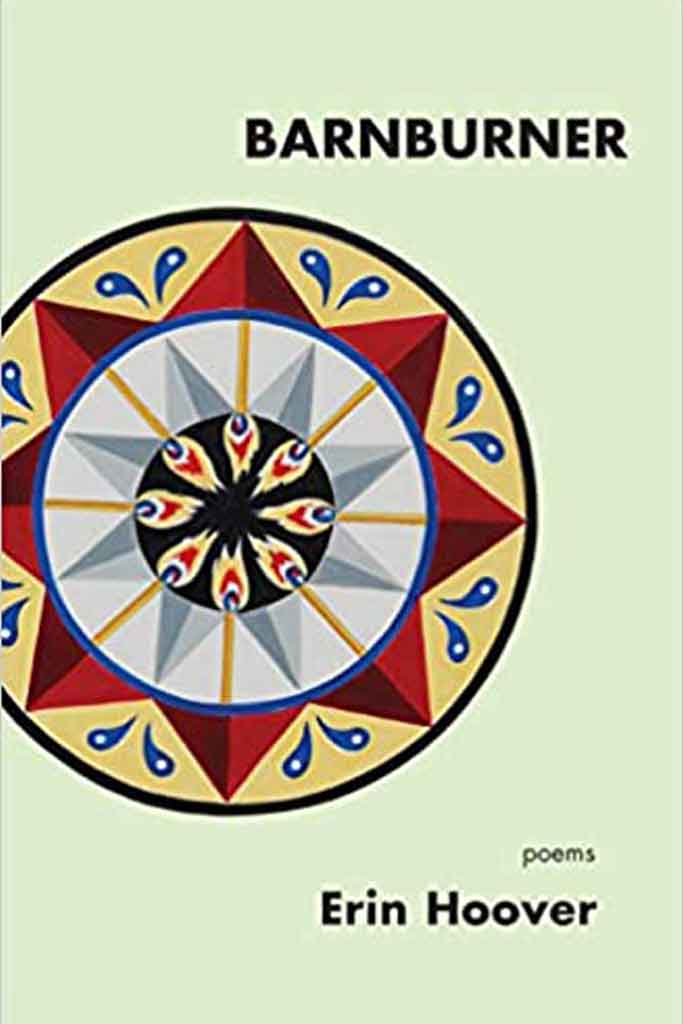 Erin Hoover fearlessly explores and reports on the experiences of a young Millennial woman entering adulthood in her debut full-length collection of poems. The overall structure of the book is a three-part narrative that steadily grows in intensity from smolder to burn and finally culminates in a bonfire resulting from the succession of poems that function as self-igniting matches.

barn +‎ burner, from the idea of burning down a barn to get rid of a rat infestation.

In a style that is both journalistic and confessional, Hoover addresses subjects such as female commodification, intimacy, and the politics of motherhood to name a few. The speaker’s voice recounts the liminal experiences of a Millennial woman standing at the threshold of adulthood with one foot situated in patriarchal materiality, another wading in third wave feminism as she navigates a burgeoning digital simulacrum on the horizon, questioning the very nature of humanity.

In Part 1, “The Lovely Voice of Samantha West” portrays the speaker working at a call center that eventually outsources jobs overseas with the help of an automated Americanized program referred to as Samantha West, a voice modeled after Doris Day. Here, the speaker first encounters the female body as a product to be utilized as an instrument of capitalism, “…The call center made me an/ expert in my voice’s currency, what I could/ do with its pitches and pauses…” all the while navigating the threat of losing her job to technology “Are you a robot? Samantha West was not/technically a robot…/…her voice vibrated in the

The poem “Girls,” much like the actual T.V. series, begins with an unapologetic tone, “The point isn’t that so-called ugly girls/ get laid on HBO, but their mishaps, that if/ the single one is funny, a slew of them looks downright ambitious.”

Later, in “Livestock,” the speaker flashes back to a scene, quotes Neil Diamond fat-shaming her mother after bumping into him at a 1966 Farm Show “…Get this/ fat girl offa me.”

The speaker adds, “That’s one version/ of intimacy, a body invading/ another’s space, both recoiling/ from trespass as if scalded.”

While in the company of S. and her young son the book’s protagonist encounters the fossilized question “Why Don’t You Have Kids?” after the friend confesses that her husband “hurled a mug/ of coffee at her—” among other offenses. The speaker silently ruminates, “I know how I’m supposed to respond,/ like I know how to slice water/ cleanly with my arms and legs.”

Part 2 finds our protagonist working as a “Temp” where her “…only job [was] to smile at people who leaned/ on reception and talked about their kids.” Years later, she trudges along in another corporate office, watching her “…days fall away like molted feathers.”

In the poem “Gifts,” the speaker describes her mundane office work as, “each year peeling away a layer of girlish skin” and also maintains a long-distance relationship in “D=R x T,” a poem set in a series of major airports during long weekends in which she confesses, “…Neither of us [are] willing/ to dampen the thrill of a friend you never grow/ used to, the romantic weekends away that refuse/ to sink into a home’s worn upholstery. You and I/ will end.” Not surprisingly, this section culminates in a fertility clinic where the speaker brazenly refutes the traditional dyadic path to motherhood, “…Because the binary/ of women’s choices is false.”

By Part 3, the speaker has shifted from disillusionment to assertiveness as she calls out the gender inequity that she swims through daily in the poem “What Kind of Deal are We Going to Make?” She remarks, “It’s what a girl’s days/ are made of: What body part, this time?/ And what will I get for it?” She then confronts cyberbullying and sex-shaming in “Takedown” with her declaration “…As it ever was, the best methodology for devaluing a woman is to strap her body/ to the cum-stained mattress of your mind.” But the protagonist doesn’t just point fingers, in “What the Sisterhood Means to Me,” she acknowledges her own complicity in a flawed social system that had compelled her to protect the character of a former boyfriend in a “Stand By Your Man” situation, only to later realize that he “…knew/ what so many men know: if you don’t/ admit it then it’s not true.”

Throughout the book, the speaker’s voice evolves from a standpoint of introspection to empowerment as she pushes against the metanarratives of modern society.

As a Gen X female, I was delighted to journey with this young woman protagonist from a state of ambivalence to self-assured agency as she confronts not only the blatant hegemonic mechanisms of misogyny but navigates the nuances of compulsory heteronormativity, traditional gender ascription, meritocracy and more. Barnburner implores the reader not only to question, but to deconstruct a flawed cultural system, as the speaker remarks:

“Every day, now, more people are dying/ from cheeseburgers and chokeholds,/ and I have lived through/ so many wars about/ what people won’t say.”

ABOUT THE REVIEWER
Stephanie Stanley Walls is currently pursuing an MFA in Creative Writing at the University of Tennessee. Her poems have appeared in Strongverse, Rat’s Ass Review: Love and Ensuing Madness, Cliterature Journal and elsewhere. You can find her at the dog park with Teddy, her Wheaten Terrier.