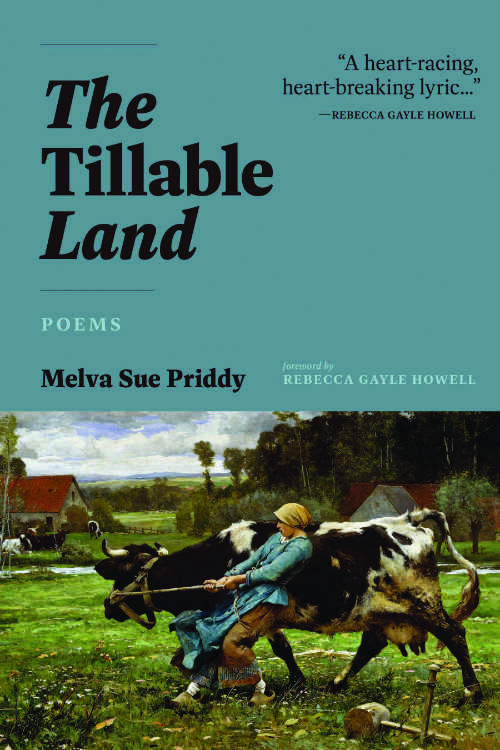 There is a line in The Tillable Land—a simple, straightforward line—that resonates to me as a working thesis for Melva Sue Priddy’s fine collection of poetry. In “Ode to the Dish Sink,” the speaker recalls how the thankless task of washing dishes came with the best view in the house, a window overlooking the garden and barn. But the speaker immediately reminds herself: “Ours was never a still life.” To appreciate the scenery too much would mean letting the stack of dishes grow even higher in a household where idleness has consequences.

But there is another implication to that line, where the phrase “still life” comes with its painterly connotations and conjures images of similar barns and gardens that can be found framed and for sale in antique stores through the region. The window above the speaker’s dish sink, after all, holds the traditional rustic beauty of Appalachia: a barn on a hill, a garden. And by the time the reader reaches “Ode to the Dish Sink” in the third section of The Tillable Land, they can fill in the rest of the scene: a grazing cow, an overcast sky. It’s a landscape that anyone who knows and loves the region will recognize. For Priddy, however, her childhood farmstead was never elevated to the realm of the aesthetic. That aesthetic stance, the simplification of Appalachia into work-ethic platitudes and neo-Brueghelian landscapes, is a privilege that Priddy obliterates in these poems.

The experience of reading The Tillable Land is akin to walking through a field on a beautiful day and finding the skull of some small animal. When one starts the walk, the day seems a little sunnier, the birds sing a little brighter, and the Romantic imagination kicks in. But when one comes across the picked-over remains of a squirrel, the terms of appreciation shift. One is confronted with the reality that, underneath (or, perhaps more accurately, woven into) the scenery, the land teems with life and death and struggle. The idyll becomes a drama for those whose livelihood is tied to the land. The calf might not survive. The crop might not yield. The sun-bleached barn needs a new coat of paint. It requires little effort to appreciate the beauty of such a rural landscape and love it at arm’s length. It takes effort to love it when you know all it entails.

And that is what I ultimately take away from Priddy’s collection: the effort found in these poems. Not simply in their content, although these are indeed poems of work—mending fences and milking cows and mowing hay—but in their craft and form. We are too quick to praise poetry that seems effortless. We speak highly of poets whose language seems natural, whose insights feel off-the-cuff, whose lines feel like conversational snippets. It is heartening to read a recent collection where the poems feel deliberate. These poems feel like the result of hard work. They are quiet and considered, where each line feels earned. Priddy does not shy away from form, as evidenced by the ten villanelles in this collection alone. If the speaker’s fingernails are dirtied with red clay from a day’s work, so too is Priddy’s pen.

But the real effort of The Tillable Land is the tenderness Priddy brings to its subject matter. It is easy to love a land that loves you back and offers its rewards freely. But Appalachian soil isn’t the forthcoming kind. As seen through the collection, it requires constant vigilance and care. But these poems cover more than just the land—they also offer a portrait of a complicated family life. The collection offers not only a glimpse into the life of an Appalachian farmstead, but the feminine experience in such a setting, where the speaker’s chores are doubled and where she is placed at the mercy of men in her family. Trauma is a near-constant throughout the early pages of this collection, where angers and unwanted advances become as natural as the seasons. But the portrait of the family nonetheless remains complex, seemingly offering the paradox that the same hardness it takes to work this land becomes an obstacle in the emotionally dense inner-workings of family.

And that is the effort that is so remarkable in this collection. These poems don’t read as effortless because they are not effortless. Priddy’s experiences have given her every reason to be bitter or to put this subject matter behind her. They’ve also given her reason to compartmentalize her past and embrace the positives found in the final section of this collection, which see the speaker as a grown woman doing her part to combat generational trauma and tending to her garden recreationally. Appalachia, after all, exists in many minds as either its darkest realities or its most sentimentalized beauty. Such simplifications are easy. To know the darkest realities of a place and love it anyway, to be tender toward that which has demanded every ounce of you—that requires effort. Constant effort. And The Tillable Land offers a meaningful, poignant glimpse into that effort.

This is a fine collection from a voice in Appalachian literature that’s long overdue.

ABOUT THE AUTHOR
Melva Sue Priddy, an American poet, received a BA from Berea College, an MEd from the University of Kentucky, and an MFA from Spalding University. Priddy taught English Language Arts and Creative Writing for twenty years. Her poems have been published in Motes anthologies and Still: The Journal, among other publications. The Tillable Land is her debut book.

ABOUT THE REVIEWER
Andrew Lee Butler is a writer from Kingsport, Tennessee. He is currently serving as editor-in-chief for Grist: A Journal of the Literary Arts.