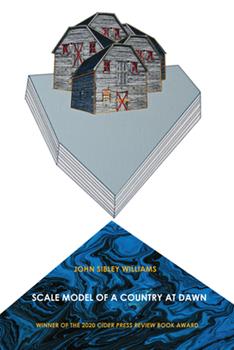 A Scale Model of a Country at Dawn by John Sibley Williams looks at the world through a different lens – a lens that feels like it came from another world. It comprises a grounded series of poems reflecting on love and family and religion – particularly the burden of the latter –  in the author’s life, written in a style that grabs the reader with it’s simplicity and integrity. In “The Gift” there is a short poem of powerful words that link to the words of “The Confession” later in the book. These two poems when read in conjunction with each other form a potent and compelling journey for the “simple box” referenced in the lines. The poem “Oncology” will, I think, resonate with many people from all walks of life – its subject matter, that of cancer, being one which does not discriminate.

The collection holds something for everyone, and the poet has used a number of different formatting and writing techniques to get very emotive subject matter across to the reader – and it works. Some of the poems look like more traditional works, but some are of a variety of line lengths – some with two line verses, and some with more prose like paragraphs. The use of symbols such as “&” add to the emphasis within the lines, and in such poems as “All We Ever Wanted Was Everything” this came across very effectively. In “Object Permanence” we are confronted by our own sense of mortality, and the last nine lines in particular, beginning with, “If what I’ve lost over the years is a lesson“, make us question one’s own time on earth.

Many of the poems conjure up images of a land lost in time, of another country. Natural elements permeate the collection and paint a picture of the contexts of the poems withnumerous references to the elemental aspects of nature scattered throughout, and which paint a detailed picture of the context for the poems, with some very evocative use of metaphor that stirs the soul.  For example, I particularly liked the line, “for joy & grief bleed together, like salt,” in the poem “Synonyms for Paradise” – one of many such lines in the book. Religion crops up all through the collection, reminiscent, to me, of the way writers like Graham Green in The Power and the Glory, and Philip Pullman in The Good Man Christ and The Scoundrel Jesus, have written about it in their prose. The poems challenge the way we think about religion, and challenges total acceptance of it.

Nowhere is this more apparent than in “Bifurcation,” the last four lines of which compel the reader to think deeply about the burden of religion, and which links to the quote from Carl Jung that introduces this poem. See this also in “As It Is on Earth“ which ends in the very intensely thought-provoking line: “between them a truth serrated as light.” The collection ends as strongly as it begins, leaving the reader with the poem “Being Islands,” and its last two lines, “we’ll own what we’ve done / or none of it was ever ours” leaving a mark on the heart.

ABOUT THE AUTHOR
John Sibley Williams has authored a number of collections including, The Drowning House (Elixir Press Poetry Award, 2021), As One Fire Consumes Another (Orison Poetry Prize, 2019), and Skin Memory (Backwaters Prize, University of Nebraska Press, 2019). He has served as editor of two Northwest poetry anthologies, Alive at the Center (Ooligan Press, 2013) and Motionless from the Iron Bridge, (barebones books, 2013) and is the winner of numerous writing awards. His website https://www.johnsibleywilliams.com/ features all his writing, events and workshops.

ABOUT THE REVIEWER
Alison Hramiak is a part time poet and part time teacher educator living and working in Yorkshire. She has written poems from an early age and has been published in several Forward Poetry anthologies and also on various web sites funded by the Arts Council. She writes for occasions at www.poetryforlives.co.uk and regularly blogs about poetry there. She reviews educational and historical writing, and has recently started performing at open mic sessions including at the Huddersfield Literature Festival earlier this year.