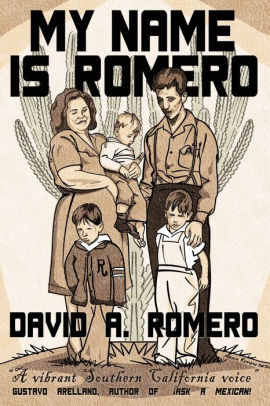 My Name Is Romero by David A. Romero

There are many occasions that prompt us to introduce ourselves: over the phone, in an email, at a business meeting, for a friendly get-together, on our first day at a new job. The typical introduction requires that we share our names with others, and sometimes this is as far as it gets before it gets uncomfortable, whether that’s because of mispronunciation or mistaken assumption. David A. Romero uses this collection to introduce himself, and he does so with care and intentionality. He wants you to know that he is “just one of many Romeros” (read his pen name again – you’ll get it). He also wants to open you up to the multifarious meanings and implications that his name carries for him: how he identifies, how others attempt to identify him, and how he pushes against the inauthentic.

Written with staccato lines that force the reader to consider each moment, often each word, fully, Romero creates poems to trip the tongue into exchanges like, “Es la lengua del pueblo? / Es la lengua de la Mexica? / Hold your tongue / Do not think to criticize me.” His are poems that travel, that cross from one page into the next like the passing of a surname or the relocating of a family. The passage is not meant to be a smooth one, as much of the writing defines and defies conflicts like racism, cultural appropriation, xenophobia, and politics.

It becomes clear that Romero is confronting a number of forces, even from within his own family, as he strives to affirm his selfhood: “My parents had dark skin /And dark eyes / When I was seven / My brother lied / Told me my father / Was the mailman / ‘How could you be the son of our parents / With your blue eyes / And white skin?’” A brotherly taunt causes a nevertheless lingering query – but the personal is also political. Poems like “Sweet Pochx Pie” and “Micro Machines,” among others, give voice to uprising and unrest, though it is often incorporated into something as mundane or unproblematic as baking or painting. Being Mexican is celebrated even as its implications are excoriated. Romero acknowledges the difficulties that accompany intersectional identities with lines like, “I’m as American / As sweet pochx pie / Light flaky crust / Identity crisis inside.” In fact, many poems resemble a recipe in that they combine the specific elements that need to interact to leave a distinct flavor. For Romero, these recipes are at times bitter, often laced with spice, and sometimes sadly sweet. With a direct speaking style that either implicates the reader in each poem or draws them in to witness his experience, the author dishes out a full course meal on identity formation.

It is not enough to investigate yourself only as an internal practice; there are external forces that influence who you are and how you are seen, and Romero accounts for this as well. Like mirrors, other people inhabit the poems at times to enable Romero’s reflections on how what you do informs who you are. In a series of epistolary verses, the writer calls out Donald Trump, Edward James Olmos, Katt Williams, America, and Israel for their various misdeeds and prejudices. To the president, Romero proclaims, “You’re no sideshow Trump / You’re the main stage / The old racism / The mean racism / Back in town.” Other poems center on the regular folks that Romero insinuates familiarity with. The high school football star, a grandfather, a roofer/painter, his uncle the artist–all generate praise and pride. These guest appearances suggest how easy it is to represent yourself well, but also how easy it is to betray yourself and your community. However, through the parallels between the first and the final poems, the readers get a sense that the author is reaching out to include himself in the kinship of his ancestors: “We are alive / And we are buried / We tend to our name / Yearly / We tend to these stones / As my father had done.”

Romero demonstrates how poetry can be used to build greater understanding not only of yourself, but also of others, through his messages and through the discussion guide he incorporates at the end. This guide takes five poems and encourages a closer reading through two to three questions about each one; in the discussion, readers are asked to revisit specific lines and make connections to attitudes and stereotypes and current events. One could easily see an educator making use of this writing and these discussions because of how accessible the language and ideas are.

In a collection that traces the fingerprint of etymology, botany, ancestry, and identity in one man’s life, Romero reminds us that we are the legacy of our lineages, and no one else can or should define what that means.

ABOUT THE AUTHOR
David A. Romero is a Mexican-American spoken word artist from Diamond Bar, CA, and a graduate of the University of Southern California. He has appeared at over seventy-five colleges and universities in over thirty different states in the USA. Romero’s poetry deals with family, identity, social justice issues, and Latinx culture. His website is http://www.davidaromero.com/

Maggie Rue Hess is a first-year graduate student at the University of Tennessee-Knoxville earning her MA in English. Her interests include poetry, 20th century American literature, Southern writers, and pedagogy.