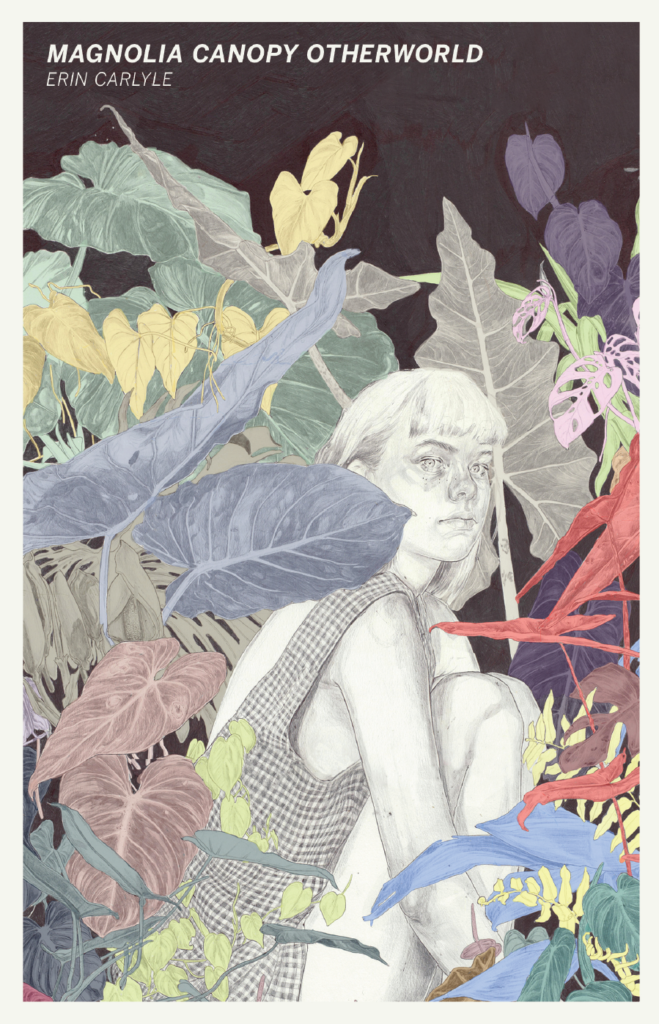 Erin Carlyle’s debut poetry collection Magnolia Canopy Otherworld opens with an epigraph out of Dorothy Allison’s 1992 novel Bastard Out of Carolina: “Family is family, but even love can’t keep people from eating at each other.” Like Bone Boatwright, Carlyle’s collection tears at what it means to be or become a southern woman. Most of the poems in this collection feature women’s dead or undead bodies, usually hidden or speaking only to the speaker. In this collection, the process of coming to be a woman doesn’t mean emerging from the cocoon of girlhood to become a butterfly but is instead wading through brackish, littered Alabama water, being afraid and alone, or being together with other girls and being afraid.

Carlyle doesn’t shy away from using autobiographical stories to root her collection in place. The opioid crisis appears in stories of her mother, as does violence against women and poverty. The end of the collection features a serialized poem that tells the story of a woman and her body being unearthed from water by “Rivermen.” This portrait of Alabama is one of death as much as it is beauty—the Spanish moss of south Alabama looks like a beautiful dead thing, after all. When asked about the woman’s death and Rivermen in the poem “Sunken” in an interview featured at the end of the book, Carlyle said,  “I just think that life is fleeting, and wherever you walk is somewhere someone else, long dead, was at some point, alive, and though I’m not a doomist, human beings aren’t that nice to each other sometimes. When you’re a woman, you know this. When you’re poor, you know this.” The poems that tell Carlyle’s story don’t give much away in details, but it’s this shared knowledge she draws on—the experiences of women and people who are poor aren’t laid bare in her poems, yet her poems articulate their shared experiences. Instead of intimate details of her family and community’s lives, the shared sense of place, and of being part of the marginalized within the marginalized gives her collection a sense of a shared language, one that the reader must parse out to come to terms with the class and gendered identities she writes from.

The collection is permeated with images and language of the occult, though it’s not supernatural. “The Animal,” or the persona the author uses within her autobiographical poetic trilogy, inhabits a world where women’s menstrual cycles are one with the moon, spells are incanted during an average night with the family, and dead women whisper their secrets through the feedback of a television screen. “Spells Cast on the Animal” lists the potions, incantations, and levitations that make a southern child’s world darkly magic—the potion in this poem is a sludgy Budweiser, the incantation is her mother telling her to go “the fuck to bed,” the levitation is just a high from a traded pill.

Throughout the collection, the emergence of adulthood–womanhood particularly–depicted as an eerie fate. The threat of danger, violation, and death emerge early on; dead girls surface from the opening poem’s river banks. In “My momma cuts virgin switches with her gums,” a poem that references Carlyle’s mother’s addiction, the initiation into a threatening kind of womanhood becomes clear: “My momma believes that god is judge, and the man / who dragged her body into the woods / wasn’t her husband. I just laugh at her tears / and wait for my turn in the pine.” The poem ends with the speaker’s mother handing her a pill of her own, signifying that the cycle of womanhood in this world is one of violence and pain. Yet that violence is rarely spoken, and Carlyle’s language instead orbits the threat of violence with a sinister glance to the woods or a man’s lingering stare.

Carlyle’s South is not without hope. In the final poem, a woman speaks from “The Afterlife of Women,” the “magnolia canopy underground” that Carlyle describes her afterlife as. These lives—the marginalized lives of the addict, the poor woman, the abused—are made immortal. The final poem begins with the ghostly echo of the lost woman’s voice through the southern landscape: “For me to stay here with the dead / I have to eat a flesh meal, make / the commitment, but for now I’m a struck / chord. I sound through pine woods, / and the thick clay mud of Kentucky.” In this afterlife, women’s experiences are compounded and disintegrate, and the cycle of Carlyle’s southern womanhood continues. Yet the speaker says, “I think I smell the oldest / danger in the air—magnolia on the wind. / I think I hear my mother calling: get home.” Here, in the final poem, the speaker turns back to the scent of nostalgia, the reminder that home is somewhere, and the promise that though her cycle of violence has continued it doesn’t have to be a violent cycle. Nature, memory, sex, girlhood awakening, the dead, Alabama, Kentucky, and God each coalesce in this volume so that when the speaker of the poem “Two Girls” says “This is what it’s like to love you,” it’s clear that Carlyle is referencing the painful and traumatic love of her home as much as she is writing an ode to her first love.

ABOUT THE AUTHOR
Erin Carlyle is a poet from Alabama, Kentucky, and lately, California. She received her MA and MFA in poetry from Bowling Green State University, and she received a certificate in Gender and Women’s Studies from Western Kentucky University. Carlyle has published one chapbook, You Split Hills and My Body, and her first poetry collection, Magnolia Canopy Otherworld.

ABOUT THE REVIEWER
Rachel Bryan is a PhD student in Literature at the University of Tennessee Knoxville. She studies 20th century American literature with a special focus on women and labor in working-class southern fiction.